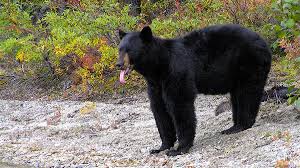 Being out in the woods, whether you are hiking, fly fishing, paddling, or just exploring, can make for some of the most memorable days of your life.  Maybe you are finding that new trout hole, or the view you haven’t seen before makes it all worth it.

With all of the benefits, there are a few risks in the outdoors. One that is unlikely but possible is having an encounter with an aggressive bear. This is a more pronounced risk if you are in Grizzly country, which for most of our readers is in the Northern Rockies, especially Montana and into Canada’s mountainous areas.  Black Bears are not nearly as aggressive as Grizzlies, but can be protective, too, if you startle them around their cubs.  They are found in many parts of the US and Canada.

One of the best things you can do is to have good-quality, reliable, and fresh bear spray with you. Studies have shown that bear spray effectively deters an aggressive bear 90% of the time, assuming you use it properly.

Here are our favorite bear sprays in 2019:

We love that this product is made in the U.S.A. It has been field tested and proven to be effective. The testing at Elmendorf Air Force Base (Elmendorf, AK) and Brown Bear Resources (Missoula, MT); resulted in proof that FRONTIERSMAN Bear Spray is effective against Black, Brown and Polar Bears.

The SABRE Frontiersman bear spray contains 2.0% major capsaicinoids which gives it the maximum repellant power. This amount of capsaicinoids is the greatest amount that the EPA and Health Canada will allow a bear spray to contain.

SABRE Frontiersman offers the greatest protection range at a distance of 35’. This distance is the greatest distance of any 9.2 ounce canister on the market can spray. It is a distance that may be as great as 20’ longer than many of the competitor products — more sprays work between 15 and 30 feet.

The sprayer will dispense 1.84 ounces of product per second. This allows you to quickly create an effective barrier of repellant between you and the bear.

The holster sleeve is designed with no restricting straps or Velcro that can slow you down when you are trying to get the canister out of the holster. You can simply reach the canister that is hanging from your belt loop and slip it out and use the spray. If you have a strap or a piece of Velcro holding the canister in position the noise and motion of unsnapping the strap can scare the bear. A scared bear is much more likely to attack.

One thing we really like about the SABRE product is that it can be shipped with a “practice container”, one that is filled with a chemical that will dispense just like the bear spray, but is not actually a bear deterrent.  This means that you can practice at home with a practice canister if it is your first time, without using up your bear spray. We think it is also a good idea to practice dispensing it if it has been some time since you have practiced, just to shake off the rust.  If you have that rare encounter with a Grizzly, we want you to not have to fiddle with your spray.

SABRE has been developing and creating safety devices since 1975.

In 1998 the Environmental Protection Agency approved the SABRE Frontiersman bear spray as a safe and effective product.

SABRE continued to design and manufacture personal safety sprays, along with protection devices like fire extinguishers, and in 2001 they became certified by Health Canada. Find here on Amazon.

The Udap bear spray is capable of dispensing large amounts of OC on the target in a short amount of time. When you are facing an 800 pound animal with the strength of ten men, and the ability to tear you to shreds, you want a product that will produce the maximum amount of coverage in a minimum amount of time.

You can completely discharge the entire canister in a period of four seconds.

The Udap pepper power bear deterrent contains 2.0% capsaicin and related capsaicinoids and 98% inert ingredients. This is the maximum amount of capsaicinoids allowed by the EPAQ and Health Canada.

Udap is a company that cares a great deal about the customers they have and the bears their products are designed to deter. The company has actively researched their products and the delivery of their products to create a deterrent that is delivered quickly and with enough power that it can make a bear change their mind about attacking a human.

The Udap website is filled with testimonials from real people who have used their bear spray to stop a bear attack and those people credit the Udap bear spray with keeping them alive.  Find here on Amazon.

Counter Assault is an EPA certified product that contains 2.0% capsaicin and can be relied on to spray for about 9.2 seconds before the canister is depleted. This means you get a long period of time to produce a pepper spray fog that will cause the bear you are facing to decide that you are not worth the trouble of attacking. This could save your life.

The Counter Assault spray can reach distances between 12 and 32 feet so you can be farther from the animal when you spray the product. The canister also has a safety cap to prevent you from accidentally discharging it.

Counter Assault is led by Gary L. Moses in their design and creation of bear spray and Gary uses his knowledge of bears and their behaviors to enable outdoorsman to have a product that will help protect them in the event of a bear attack.

Counter Assault was the 1998 recipient of the Interagency Grizzly Bear Committee Stewardship Award for research and development of bear pepper spray.  Find here on Amazon.

How long does bear spray last?

Most bear spray products have a shelf life of 3 years.

As with most products that we rely on for safety, perhaps err on the side of keeping your spray less than 3 years just to be safe. If you see that it is over 24 months old, consider swapping for a new one.

What else can bear spray be used on?

Bear spray can be used on other wild animals if you find yourself in danger of attack. It is not recommended that you use bear spray on humans because the dosage of pepper spray is greater than the common dosage of pepper spray found in human deterrents, but in the case of an emergency these sprays would likely stop a human attacker.

We have seen mammals such as badgers, wolverines, and anything with rabies act abnormally aggressive.  Bear spray would probably work on those as well.

Can Bears Climb? Are you Safer up High?

Yes, bears can climb. No, you are not safer if you climb.

While it is true that you will do yourself a favor by making yourself look big — which can be accomplished by standing on a hill — climbing up on to your vehicle or roof top tent, or up a tree or small building, is not advised. You are much better off having the ability to move and maneuver, which you largely lose if you climb a stationary object.

why are grizzlies such a risk?

This more aggressive behavior may be in part due to their size and to the fact that the grizzly bear is not capable of reproduction rates that are as great as those of black bears. Researchers believe that the grizzly is more protective because they are less likely to produce as many offspring.

which bears are common in north america?

The most common bear in North America is the Black Bear.  It is less aggressive than a Grizzly, but can still be provoked. The Black Bear can be found throughout the North USA and Canada, as well as along the Appalachian Range in the East and the Rockies and Sierra Nevada range in the West.

Grizzly Bears are more common in the very Northern Rockies and into Western Canada.  As far as the USA goes, think Yellowstone and Western Montana.

why would a bear be aggressive?

If the bear has cubs with them or in a close vicinity to where you are then they may be more aggressive in an effort to protect their young. Never pick up a bear cub even if you find it alone because when that cub sounds the alarm by crying out the mother bear will come to protect it and she will not be thinking rationally or responding to natural ingrained fears she should have of humans.

The other very important thing to note is that while most bears are naturally a bit tentative of humans, they consider other four-legged animals either enemies or prey. If you are with your dog, all bets are off — a bear will behave less predictably. Be extra cautious if you are in bear country with your dog.

The posture that you take when you encounter a bear may cause the animal to be more aggressive. Do not try to stare the bear down.