When is the Best Time to Visit Maine?

Home /Destinations/When is the Best Time to Visit Maine? 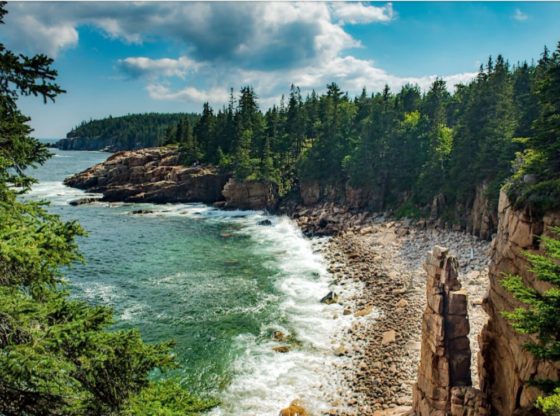 When is the best time to visit Maine?

Ask most people, and they will say “the summer”.  While the summer is a great time to go to Maine, there are great things to do all year round.

With that said, though, for most people who like comfortable, “summer-ish” weather, June through September is when you will get the most comfortable days.  In Portland, the average highs during each of those months is in the 70s.

Let’s take a deeper look at the times to visit Maine.  Keep in mind that Maine is a big state, with lots of different geographies and weather patterns.  Kennebunkport (Southwest corner, on the water) and Frenchville (Northeast corner, new New Brunswick, Canada) will have very different weather on the exact same day.

June through early September:  Most popular

Visiting Maine is definitely at its peak during June through September, because of the mild weather and comfortable temps.  More specifically, July and August usually see lots of Maine travel.

Early June is a great time to visit, because the temps are getting warmer with highs usually in the 70s.  Crowds in popular coastal towns usually see an increase in traffic as soon as Memorial Day comes around, with another big step up as most kids finish school in early June.  Most Maine schools go through the first or second full week of June, meaning that you might be able to sneak in a less-crowded visit to some popular cities if you go right after Memorial Day.

If you visit in late June, July, or August, it might be a peak time at many hotels and resorts, and you may need to book well ahead.  For those who are mobile and can explore, this might be a great time of year to pack a tent, hook up your travel trailer, or throw on a rooftop camper in order to know you have a place to sleep, if you are flying by the seat of your pants.  Because so many people who travel to Maine will fly into either Boston or Portland, the further north and east you venture, the more you might be away from the summer crowds.

If you are thinking about going into the Maine woods and spend a little time outside, keep in mind that black flies (they bite) are around between Mid-May and Mid-June.  These flies can be quite a pest, and mosquitoes are also a factor. Bring some bug spray if you want to get outside. Picaridin-based repellents are often the preferred method of keeping the flies away from you.  Also, keep in mind that this is the season bears are most active. Maine only has black bears, which are generally pretty harmless, but can be a little sketchy if you surprise or threaten their cubs. Some good bear spray is not a bad idea if you are going way out in the woods.

Keep in mind that Maine is also in Blacklegged Tick / Lyme disease country, mainly the Southern part of the state. Don’t let that keep you away — they can be avoided. Just get some good tick repellent, apply it, and go about your business.

And while lobster is a year-round delicacy in Maine, many suggest that the lobster is best in the late summer, when there is a “new shell” on the lobsters. This allows more salt water to marinate the

tender meat. Most lobsters in Maine are caught during the 2nd half of the calendar year, so quantities are abundant in later summer too.

Maine’s famous blueberries are typically there for the picking from late-June through mid-September. You will find the most reliable bounties in July and August.

Just after Labor Day, in the early weeks of September, you just might find is the best time overall to visit Maine. Kids are back at school, crowds are down, but there is still some summer in the air and all of the seasonal businesses are still open as they gear up for leaf season.

The colors obviously change first furthest north, and then work their way south. If you are headed up to Northern Maine, you may want to get there in September to get peak colors, or eat least by earlier October.  As you go south, conventional wisdom is that colors generally peak around Columbus Day in the more populated coastal area.  Higher elevations and Northern latitudes are going to be earlier (like September), while lower elevations and Southerly areas will be later (October).

Visit in early November, and you will still get some colors hanging on.  You will also have the advantage of less people around you, but there will be cooler temps.  Also, keep in mind that November is typically the highest precipitation of any month in Maine, and that sometimes comes in the form of snow.

And while the legendary Acadia National Park is a popular summer destination for many families, we hear lots of travelers swear that September and October at the prime times to go. Weather is still good, it is generally sunny, and it you can still explore, kayak, and hike all over — but with a fraction of the crowds you would experience prior to Labor Day.

People joke that winters in places like Maine are six months long, but typically you can expect a 3-4 month season of wintery weather.  If you are like us, you enjoy the change of seasons. Winter gives you a chance to grab a tackle box and ice fishing rod, and catch some beautiful fish on one of Maine’s 6,000 inland lakes.

Winter is also a season when many people get outside to ski — either downhill or nordic. The downhill skiing in Maine is outstanding, especially at our favorite spot in the state, Sugarloaf.  Just remember your best thermal underwear and heavyweight gear — it can get downright cold. But as fans of the North, that doesn’t deter us!

For those visiting coastal towns in winter, keep in mind that many Maine restaurants and shops are seasonal, and they may be taking their own break during that time.

April and May:  A Little Cool and Wet, with Glimpses of Gorgeous

Things begin to snap out of winter in late March, and by April you just might have a nice stretch of warmer weather. Flowers begin to bloom, trees bud, and seasonal shops start to rev back up.  The average high in Portland is 53 in April and 64 in May, so you are likely to get some downright comfortable days.

April can often be a little wet, so factor that in if you want to spend lots of time outside. Depending on the winter, there can also be lots of snowmelt in parts of the state, creating for wetter footing on trails.  If you hike, make sure your boots are waterproof and your gear is a little hardier.

Still, you might be able to get some excellent deals on lodging in May. It is still shoulder season and prices are low, but if Mother Nature cooperates, you could get a great stretch of comfortable weather to explore in. A good weather weekend at May prices could prove to be an absolute steal for a great excursion to Maine.