3 Ways to Enjoy the Outdoors in the Dakotas

Home /Destinations/3 Ways to Enjoy the Outdoors in the Dakotas 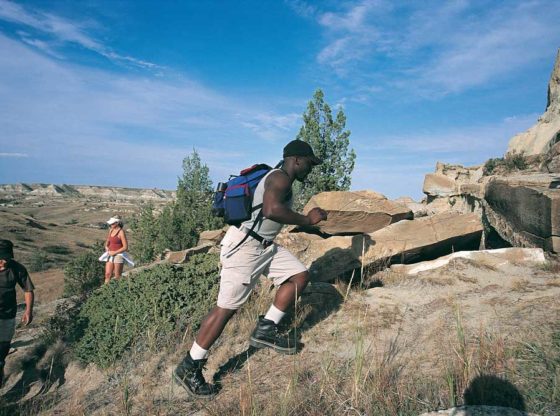 The outdoors scene in North and South Dakota is underrated. More rugged than people assume, home to some of the best biking and hiking around, and host to world-class hunting and fishing, the Dakotas have much to offer an outdoors enthusiast.

Combined with fun towns like Deadwood, Spearfish, and Medora, we think any outdoor enthusiast who does not experience North or South Dakota and all of the outdoors experiences they have to offer is missing out.

Granted, both North and South Dakota are a bit off the beaten path for many. Together, the two states account for just over 1.6 million of population — 40% less than the population of the Denver metro area alone.  That might explain why you don’t hear as much about the Dakotas as

some other parts of the West. But for people willing to explore, the Dakotas hold some nature, wildlife, and outdoors activities that you can’t find anywhere else.

When it comes to North and South Dakota, we notice that many people from other parts of the country refer to the two interchangeably. Each has its own culture, feel, and great destinations to offer.

Think of it this way as a cheat sheet:

What they have in common are a few great outdoor activities.

The biking and hiking in the Dakotas will give even some of the best active destinations in the West a run for their money. Generally speaking, the area West of the Missouri River features elevation changes, buttes, small canyons, and plenty of rugged terrain that creates as much difficulty as the technical cyclist or hiker wants. In general, it is an area unspoiled by roads, pollution, and overdevelopment, an area where you can still get away from folks. It tends to also be a drier climate. The area East of the Missouri is generally more agricultural, and a bit more temperate, although it is home to some great wide open spaces and outstanding wildlife and hunting opportunities.

Near Medora, ND, the Maah Daah Hey trail is about 100 miles of challenge, vistas, and single-track goodness. It is open to hikers, horses, and cyclists, however the cyclists need to take marked bypasses around the sections that go through Teddy Roosevelt National Park. While some of the trail is flat and smooth, other sections provide plenty of technical challenge. Many who ride or hike it say that some of the toughest parts are staying hydrated in the dry sun. This part of North Dakota averages 75% sunshine in July, with highs in the low 80s.  And this part of the country has very little shade in the way of trees. Remember a hiking hat and sunscreen, as you will get some sun.  Also, don’t forget your binoculars especially if you are hiking, because the views are expansive and interesting.  You will most definitely spot wildlife along the way.

Also nearby Medora, the two units of Teddy Roosevelt National Park provide for outstanding hiking for all skill levels.  Many trails explore different corners of the park, some of which are relatively flat and

beginner-level, but most of which can create excellent challenge some some outstanding views. Much has been written about the various hikes in TRNP, so refer to those for more information.

In South Dakota, the Black Hills also offer some heavy-hitting trails for bikers and hikers. One of our favorites is the 100-mile Centennial Trail, a gem of a trail that gets relatively little foot traffic given its great location. It connects two state parks, and sees 2,000 feet of elevation gain through rugged hills and grasslands. It offers some tame sections along with some more technical singletrack sections.

The Mickelson Trail, 110 miles of crushed gravel, runs near the old Western town of Deadwood.  It is a wider trail than the Maah Daah Hey and Centennial, so it is great for people who are not as comfortable with singletrack.  Its surface is perfect for people who are into the high-growth gravel biking category and want to get some great mileage in.  Because it is part of a rails-to-trails project, it tends to be a bit smoother and flatter, so has more mass appeal for the average rider.

The fisheries created by the Missouri River in both North and South Dakota are some of the most productive and diverse in North America. For those whose gear is made up of rods and tackle boxes, the Dakotas won’t disappoint. And given the number of fish available, the crowds are downright non-existent.

The upper section of the Missouri in North Dakota forms Lake Sakakawea, named after the famed explorer who are crucial to the Lewis and Clark expedition. At a whopping 380,000 acres and 180 miles long, this is no small lake. For years, fishing enthusiasts have had Lake Sakakawea on their list of top American fisheries. The lake produces outstanding Walleye fishing, but also produces plenty of Northern, Bass, Catfish, and even Salmon.

In the Northeastern corner of North Dakota, Devil’s Lake has been considered a top-notch fishing spot in the country for a long time. It is sometimes referred to as the “Perch Capital of the World”, and offers many local guides and outfitters to help get you on fish even if you are from out of town.

Moving down to South Dakota, Lake Oahe is also a reservoir of the Missouri River and produces walleye fishing on par with Sakakawea. It is even larger — stretching for over 200 miles, and with a max depth over 200 feet. Some of the most popular fishing access points for Oahe include Fort Yates, Mobridge, and Pierre. The June and July fishing is usually outstanding and popular, but don’t overlook the great fall fishing that usually occurs each October and November.

Pheasant hunting in their natural terrain is a unique outdoors experience. Beautiful views, plenty of exercise, and the frequent excitement of birds taking off out of the grass in front of you is a combination that

makes for rich and rewarding days. What’s more, pheasant hunting typically takes place in the fall, which is generally a mild and sunny time of year.  In our opinion, it is one of the best hunting experiences you can have, anywhere, even if you don’t hit a single bird.

If you are lucky enough to have access to private pheasant land in the Dakotas, don’t take it for granted. For the rest of us, you may want to work through an outfitter and lodge like the ones curated at Dakota Hunting Trips (here).  These outfitters are used to hosting people from all parts of the country, and hunters ranging from experienced to first-time. It can be a great way to access prime land, too.

Public land is often overlooked. While it can be a little crowded during the opening weekend, once you get into the season, and away from main roads and towns, you can actually get quite a bit of space to yourself (and your dog). Just grab some good thermal underwear and a couple layers of clothing that can be removed as the days goes on. It is not uncommon for the day to start out at around freezing, but top out in 60s or 70s with sunshine.

And while we don’t write specifically about goose and duck hunting, the Dakotas are world-class in that arena too, thanks for having a prime location on the coveted Central Flyway cutting through North America.